Good Morning! Have you started getting in the jungle mood?

There is a powerpoint to watch first with facts about the jungle:

Activity Idea : Make a rain forest in a jar 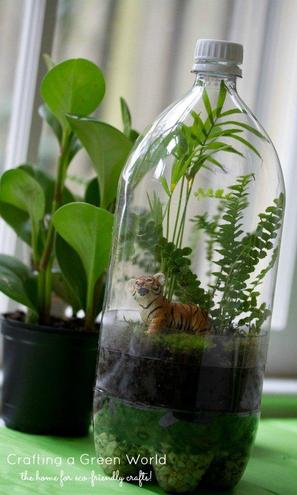 Grab a container (an old jar or maybe a small fish tank) and fill the bottom with an inch of sand/gravel. Over the top of that put an inch of soil and compost.

Grab a few plants ferns are great.  If you really want to be impressive, grab an orchid and stick that in there as well.

Carefully plant your ‘rainforest’ vegetation and give it a good old watering.

Now put something over the top of the fish tank or jar, cling film if its a small jar or a piece of cover glass if its a fish tank and put your new mini rainforest somewhere light. Make sure it isn’t in to much direct sunlight or the poor plants will cook in there!

Don’t forget to put a nice big rock in there for decoration or perhaps a toy jungle animal.

(The science bit: Now sit back and watch as your mini rainforest starts the cycle of taking up water from the soil through ‘transpiration’, using the nutrients they need along the way and then releasing the water back into the system through ‘evapotranspiration’ as the water evaporates into the air. The water droplets on the surface of the tank or jar are caused by the water in the air ‘condensing’ on the cold glass and then drop back down to the soil for the roots to take them back through the plant again).

'Hot' Activity - Following on from yesterday have a try at 'v' bingo below and try practising blending and writing some of these words:

'Cool' Activity -  Can you draw yourself a snake and then along the snake try making a number line with the numbers from 1- 10.  A grown up can help you write the numbers just concentrate on getting them in the right order.

'Hot' Activity - Have a look at the estimation game below and see how close you get with your guesses.